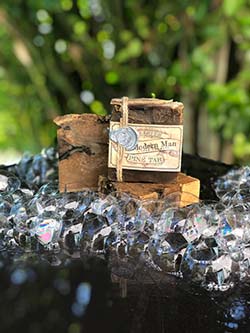 Pine tar was used in medicine 2000 years ago by the Greeks, as described by Hippocrates. Pine tar has been used in topical preparations to relieve itching and inflammation associated with a range of skin conditions; such as eczema or dermatitis, psoriasis, chronic lichen simplex, seborrhoeic, sunburn, nappy rash, prickly heat, hives, chicken pox, insect bites, jock itch and other dry, itchy, flaky or inflamed skin conditions.

Pine tar is known for its antibacterial and anti-fungal properties. Pine tar soap is very cleansing, but at the same time, is quite good for sensitive skin or those who suffer from allergies. It is possible to have sensitivity to pine tar, so that is something to look out for, but this is very rare.

If you are someone who generates a lot of body oder, you should definitely give pine tar soap a try. Because of its anti-fungal properties, pine tar soap is great for deodorizing and leaves you clean and refreshed.

Pine tar has a very specific scent. A scent that can be best described as earthy. It can be argued that this scent is primarily a man's scent and activates the inner "yummy" in members of the opposite sex. One woman admitted to me that she, "..thinks about the smell even days after being exposed to it. It's the scent of man."

Regulations set forth by the FDA prohibit bath and body companies from making health-related claims about beauty products. Modern Man Soap Company is not a medical or healthcare professional and does not claim that the use of our products may have a positive effect on pre-existing physical and/or mental health conditions. The information in our listings pertains to the properties of specific ingredients used in our products.